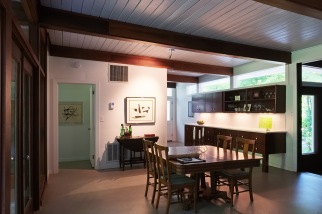 Originally designed in the early part of the 1950s, this residential project was both a renovation and an addition. The primary goal of this work, as stated by the owners, was to respect and improve the original structure. Our design objective, as architects approaching the work, was to reveal the logic of the existing house, to reinforce the existing visual language and at the same time to create a new series of spatial connections and sequences.

The current owners found the house in a neglected state and set for themselves the task to renovate and improve the property. The kitchen contained hand built cabinets thick with paint, the bathroom was small by contemporary standards, the master bedroom had no closets. The response to this condition was to deploy new cabinetry in the kitchen and bathroom, reconsider the connections between these rooms and the shared space of the living room, provide for new finishes throughout the house and finally provide an addition to the master bedroom. In such a small space, each wall is expected to perform multiple functions, a bathroom wall is a bookcase in the master bedroom and a new vanity in the master bathroom. Throughout all of this work, attention was given to bringing the residence up to contemporary code and energy compliance, all of which helped to provide this building with a second life.